What type of dental bleaching gel is best: Carbamide Peroxide or Hydrogen Peroxide? 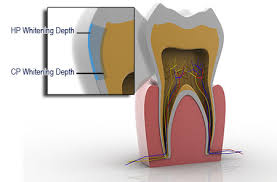 Second, a hydrogen peroxide gel is often manufactured in a highly viscous glycerin base in order to inhibit its natural instability and deterioration. Glycerin is effective in slowing down hydrogen peroxide's deterioration.  However, in doing so, it also delays the ability for the peroxide to be most effective when it is applied to your teeth, unable to immediately start penetrating the pores of the teeth where most of the staining occurs.

Bottom line, Carbamide Peroxide in a non-glycerin base is the ideal gel to use for dental whitening.  It retains its full-strength power longer, it is quickly reactive in whitening your teeth, and with elimination of the glycerin required to stabilize hydrogen peroxide, the pore penetration of Carbamide Peroxide gel is much greater while teeth sensitivities are avoided.